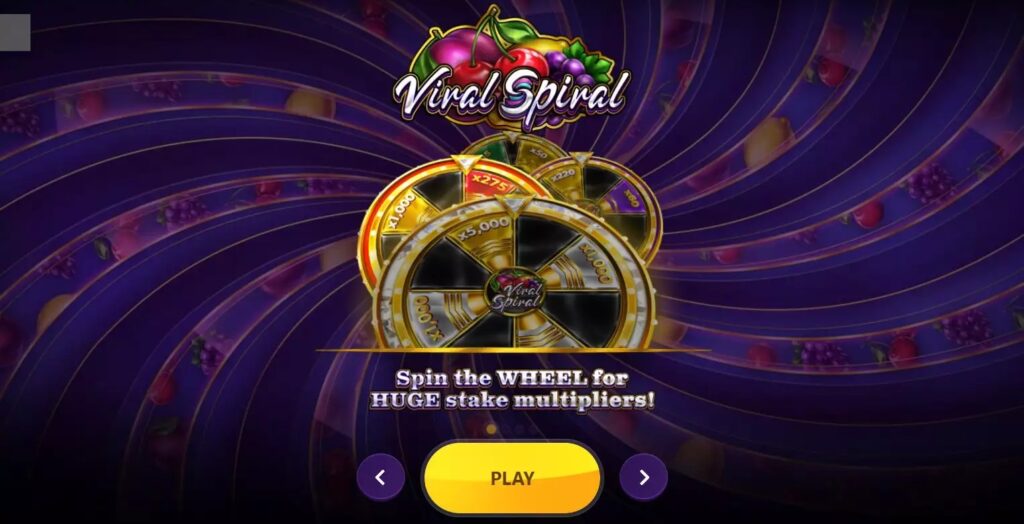 Viral Spiral is a very strange slot machine, and it’s nothing like anything we’ve seen from Red Tiger in the past. The use of a single reel with just one symbol visible on it, rather than the fruit motif that affects its symbols, is what makes it stand out. Those who are tired of the conventional online slots will appreciate the unique experience provided by this one.

On a single reel arrangement, you’re playing with one active line. The game will still do well in some situations, with the potential to pay out up to 5,000 times the amount wagered. It’s also quite volatile, with an RTP of 95.69 percent, which is below average.

With the ability to choose the total bet immediately, you should be able to get started playing Viral Spiral in no time. It costs as low as $0.10 every spin, but you can bet up to $20 per spin.

Viral Spiral will be capable of great things, at least if the fact that a single line/symbol can result in wins of up to 5,000x the total stake is any indication. It won’t be easy for you, as the strong volatility will attest, and the RTP of 95.69 percent isn’t quite as high as I would’ve liked.

Features of the Viral Spiral Slot

It’s possible that playing this slot machine is as simple as it appears. It’ll be a single symbol that lands on the single reel, and the result might be a blocker symbol that doesn’t do anything or a symbol that gets you to an unique bonus. It’s the one with the Bonus Wheel that you desire because it’ll activate a bonus function.

Nudges, which appear at random when you’re in the main game and striving to reach the Bonus Wheel, may provide some assistance. If a Bonus symbol appears in view, it will propel the reels forward.

Then you’re led to a Wheel, which will spin and award you a prize of up to 50 times your stake, or a loss. Because the spokes bearing prizes are larger, your chances of winning something are roughly 3 in 4. If this occurs, the prizes on the Wheel will receive a boost, and you will be offered the opportunity to respin it (but the odds drop to 50 percent then). You can win up to 5,000 times your stake if you repeat this process three times (by getting the top prize multiple times from the Wheel, since this gives the next round a bigger boost in value).

There isn’t much to Viral Spiral’s design. At least in theory, you’re staring at a fruit-themed slot machine, as these are the ones in the background and at the top. The blocker symbols aren’t important, and the bonus symbol is what you’re after in the end. It’s a modern design, but it’s also quite simple and has some old slot elements.

Viral Spiral is unique, which may be a good thing for individuals who are quickly bored. However, because the motion is very simple overall, it is unlikely to capture their attention for very long.