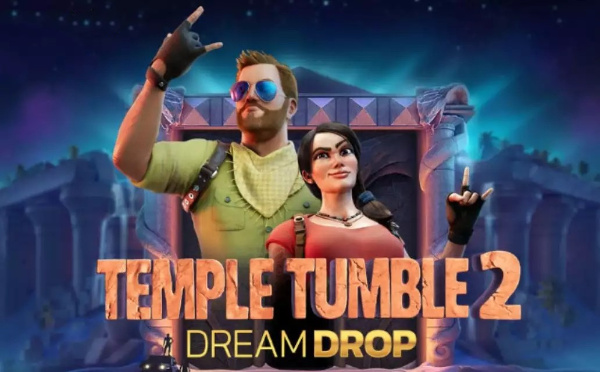 Relax Gaming’s Temple Tumble series continues with Temple Tumble 2. They appear to be switching to a Cluster Pays system for the second slot machine after playing a Megaways game the first time. The initial game didn’t have much in terms of visuals, but it might be better now. I imagine the same ancient civilizations motif to be employed here, with the reels being housed in a long-lost temple. The new Dream Drop progressive jackpots will be the most compelling aspect of Temple Tumble 2 for many players.

Temple Tumble 2: Dream Drop has 6×6 reels, which means there will be a lot of opportunities to win because there are 46,656 ways to win in that region. In terms of payouts, it’s a blend of the ordinary side’s prizes of over 10,000x the investment and the Dream Drop network’s progressive jackpots (the top one is guaranteed to pay by the time it hits 10 million EUR). Starting with the wild, you’ll find a variety of powerful bonuses, including cascading reels, free spins, multipliers, transformations, and other modifiers.

Even if there are numerous methods to win, the game only costs $0.20 to $100 to begin playing. The precise quantity is determined by the player’s budget and playing style.

Even on its own, Temple Tumble 2 pays well, with a maximum payout of 10,045x the stake on the regular side of the slot.

Because this is a slot with progressive jackpots, the RTP is expected to be lower. It only gets up to 94.80% in this case, with the Dream Drop jackpots accounting for 12% of the total.

To begin, you must create winning combinations by landing 3 or more matching symbols on consecutive reels from left to right. This is the same as with any other slot machine with multiple ways to win. What makes Temple Tumble 2 unique is that it includes blocker symbols that have no value. As a result, you’ll have less chances to win than the maximum feasible.

These winning spins result in Cascading Reels, and the new symbols that replace the winning ones should provide more combos and prizes. If they’re near to winning positions, the symbols that aren’t worth anything are likewise deleted.

There are a couple of wilds in the game, and they serve as substitute symbols.

If you use the cascading reels concept to remove all blocker symbols at the end of a round, you will be awarded 6 free spins. Remove all symbols and blocks to earn an extra three rounds.

As is customary, the player gets certain benefits during free spins, and they get to choose which ones to use:

Blocks with 1-3 extra spins and others with up to 3x multipliers are used in this medium-volatility game.

High Volatility: relies on Fire Transform blocks (which, when destroyed, transform into a random symbol) and Persistent Wilds (turn into sticky wilds which can be part of up to 5 wins).

Extreme Volatility combines all of the above-mentioned blocks.

The progressive jackpots can be won at random during paid spins, which is the game’s primary goal. If you land DD logos on all five reels first, you’ll be taken to a bonus round where you can win one of these jackpots. The next step is to try to fill the reels with these symbols, and a prize will be awarded based on which one is filled.

Temple Tumble 2 appears to be the narrative of two adventures, who both feature as wild symbols on the reels. The reels appear to be situated between two big pillars with snakes carved on them, and there are ruins of old temples in the background image. Overall, a solid design, although I wouldn’t spend more time on the lower-paying symbols.

When it comes to symbols, the first few will have Royals from Jack to Ace. After that, we see snakes, skulls, and three different kinds of jewels.

Temple Tumble 2: Dream Drop is a fantastic casino game, but it’ll appeal to people who want to play for the progressive jackpots. The fact that the Mega Jackpot has a cap on how high it can go adds to the excitement as it draws close.