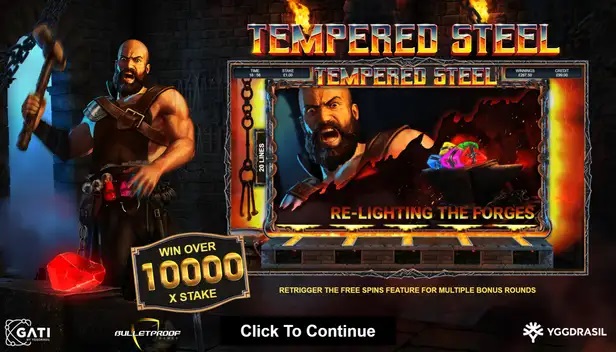 Yggdrasil Gaming and Bulletproof Games are releasing Tempered Steel soon. This brand new slot game features a theme based on blacksmiths and their craft. It’s all about the weapons they produce in this scenario, and many of the important symbols will display them. Aside from the concept, there are other things to love about it.

You’ll note that there are 20 active lines on the 5×3 reels that spin each round. The slot’s potential is good, with payouts of up to 10,028x the wager (up to $1,002,800 in cash) possible. Free spins, stacked wilds, a Pick Me bonus, and the Lock and Spin rounds are among the features you’ll find inside.

The absolute smallest stake you can make will only cost you $0.20 to start a spin. There are better wagers to choose from, with a maximum value of $100.

Tempered Steel performs a wonderful job of motivating the player to take a chance and give it a few spins, with a top prize of 10,028x the bet. According to the odds, the top reward of $1,002,800 is the most you might win if you bet the maximum amount.

Another area where the slot excels is in the return of winnings to players. It will return 96 percent of the money spent on it to players, which is a good RTP for a modern game of this type. It’s not your RTP, though; it’s the game’s long-term RTP, calculated over billions of spins.

You’ll notice that the Blacksmith is the slot’s wild symbol, and it can be substituted for other symbols. If it contains enough symbols to form its own combinations, it can even pay out directly, up to 100x the bet on a single line. It won’t take the place of feature symbols, as it does in most other games.

Random modifiers can appear at any time during the game. These are some of them:

The free spins will be accessed by the Forge Bonus symbol. It’s just necessary for at least three of those symbols to appear someplace. In theory, the amount of free spins is limitless. It works by lighting five forges at the start of the game, which become active as you move through the rounds. When forges become active, they add wilds to the reels with which they are related. Each forge has 3 to 5 wilds to add to the reels, depending on the triggering symbols.

After each round, these additional wilds will move up one spot. Only once you’ve consumed all wilds from the forges and those wilds have departed the reels will the free spins expire.

If the game relights the forges after the feature ends, there’s a chance you’ll get another shot at it. Then one additional wild is added to each forge, but each forge can only have a total of five wilds.

If you wish to play the free spins straight through, pay 100x your bet and select the Buy Bonus option.

It features a blacksmith’s forge in the background and a dark overall design, which is ideal for highlighting the fires. In Tempered Steel, a stacked wild with a lot of potential, the blacksmith is a prominent symbol. Another extra symbol, the forge, has a significant impact. It has the four card suits at its lowest points, made of metal and fire, as it does with its regulars. Images of swords, daggers, hammers, crossbows, and a battleaxe follow.

Overall, I believe you will find enough to occupy your time inside. The major areas of interest are the theme and the features that were implemented.