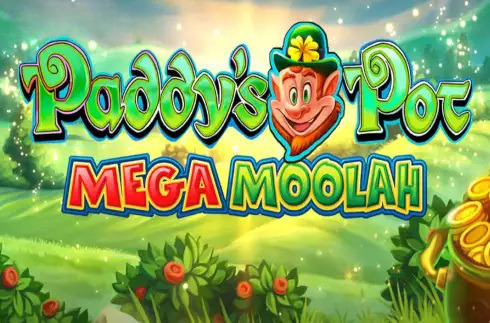 Games Global is known for being generous with its partners and allowing them to use mechanics like Rolling Reels and contribute to the popular progressive jackpot game Mega Moolah. While it is rare for players to win the top prize in Mega Moolah, which can reach millions of dollars, many people still enjoy playing to win smaller prizes or contribute to the pot. Paddy’s Pot Mega Moolah is a leprechaun-themed version of Mega Moolah that allows players to experience the excitement of this popular jackpot game.

Paddy’s Pot Mega Moolah is the second Mega Moolah slot developed by Just For The Win, and it appears to be a reskin of their first one, Juicy Jokers Mega Moolah, with Irish-themed imagery and sounds. The lively music and visuals create a positive atmosphere that complements the optimistic attitude needed to play a game like this. While it may be a bit of a cliché, it seems that this is what players are looking for when they play Paddy’s Pot Mega Moolah.

Most of the screen in Paddy’s Pot Mega Moolah is taken up by gaming-related elements, such as the four progressive jackpot values displayed on the left part of the display and the 5-reel, 3-row grid. The Mega jackpot is undoubtedly the most crucial feature for many players, though it is worth noting that the game has a medium level of volatility and an RTP of 92.03%. A portion of each bet is added to the jackpots, and players can choose to wager between 10 p/c and £/€10. The paytable notes that the chances of triggering the jackpot increase with the size of the bet.

Developer: Just For The Win

In Paddy’s Pot Mega Moolah, landing a respin wild symbol on the third reel of the base game triggers the Respin With Returning Wild and Final Respin feature (which occurs approximately 1 in 36 spins). The respin wild and any regular wilds on the screen are highlighted with a green frame called a Returning Wild. Only the respin wild symbol appears during the respins, and the Final Respin occurs when there is no more land. Wild symbols are added to any positions highlighted with the green frame during the Final Respin.

In Paddy’s Pot Mega Moolah, landing 3 scatter symbols on the first, third, and fifth reels trigger the free spins round (which occurs approximately 1 in 177 spins). The contest consists of 9 free spins plus 1 Final Free Spin, which cannot be re-triggered. Only Paddy’s wild symbol may appear during the first nine free spins and highlights its position with a green frame. If it lands on a position that is already marked, a randomly chosen non-marked position is given a green frame. On the Final Free Spin, all positions highlighted with the green frame turn wild.

In Paddy’s Pot Mega Moolah, landing three jackpot symbols on the second, third, and fourth reels triggers the Mega Moolah Progressive Jackpot Wheel (which occurs in approximately 1 in 92 spins). The wheel spins to award a cash prize of 1x, 2x, or 3x the bet or one of the four Mega Moolah jackpots. In addition to the prize, a 2x bet payout is also awarded.

Games Global may be running out of original ideas, as Paddy’s Pot Mega Moolah appears to be a clone or reskin of an existing game with an uninspired theme. Despite its average RTP and potentially harsh odds, Paddy’s Pot Mega Moolah is based on the top-rated Mega Moolah slot series, which is known for awarding some of the most significant prizes in online slots. In 2019, Mega Moolah reportedly paid out over a billion Euros, and, likely, the figure has only grown since then. While many players may dream of winning a massive jackpot, only a few will be successful.

While most players are unlikely to win the Mega jackpot in Paddy’s Pot Mega Moolah, the rest of the game may still be enjoyable for fans of Irish-themed slots. If players are not particularly interested in leprechaun games, there are many alternatives to Mega Moolah available. However, those who enjoy this theme may find Paddy’s Pot Mega Moolah appealing, as it has a charming, retro vibe reminiscent of Rainbow Riches. The game’s three different wild symbols add variety and keep players engaged while they wait for the jackpot round to trigger potentially. It is worth noting that the non-jackpot maximum win in the slot is just 612 times the bet, so it is primarily played for the chance to win one of the progressive jackpots.

Paddy’s Pot Mega Moolah may not offer anything new in mechanics or theme. Still, it does deliver on its promise of providing a leprechaun-themed environment in which players can try their luck at winning the Mega Moolah jackpot.