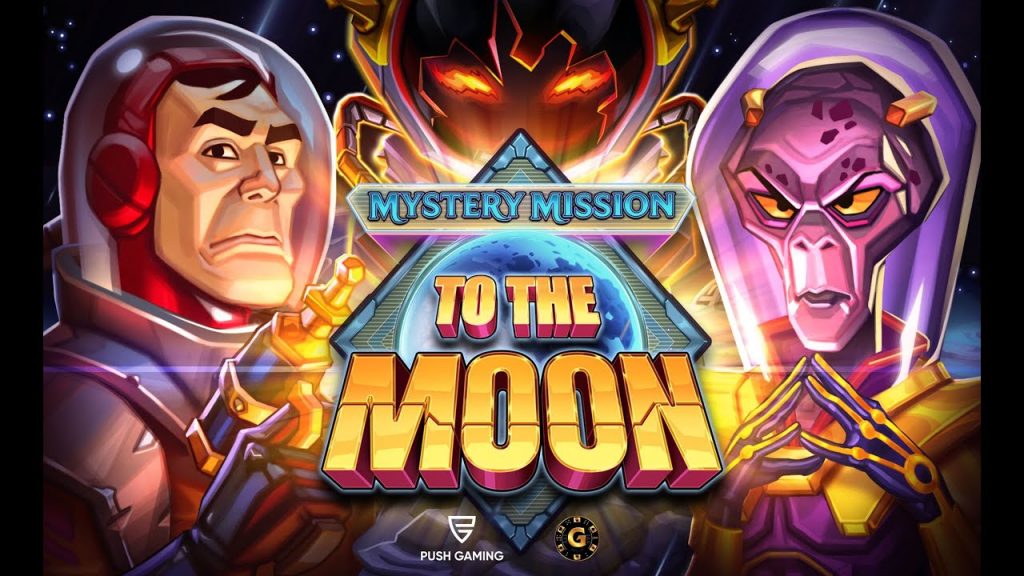 If you’re looking for a slot game that will allow you to explore various technological developments, Mystery Mission to the Moon is a good pick. It’s a production from the Push Game software providers. Unlike its title, which depicts a mission to the moon, the game is not based on finding mysteries. Instead, it’s a mission to the sci-fi lab with a glass case house that contains mysterious treasures and technologies from previous explorations.

The slot’s visuals are on another level compared to other games. The symbols are well drawn with good and neat animations. Additionally, the audio is commendable; no player can dare complain about this. At the center of the room is the gaming area, which has increased since the introduction of the mystery museum.

The game takes place in a grid with six reels and four rows with 20 paylines. It’s a highly volatile slot with an RTP of 96.25%. However, the RTP varies depending on how a player handles the game. The bet ranges from 10 p/c to 100 euros per spin.

Apart from that, this game also has the Ante Bet function, and it’s the first time the developers used this feature. If a player activates the Ante Bet feature, it will increase the bet by 25%, providing a higher chance of landing wild moon symbols that will trigger wild symbols.

A player needs to land at least three matching symbols on adjacent reels across the payline from the left to collect coins in this game. Mystery Mission to the Moon has 11 pay symbols like a robot, an alien, a ray gun, an explorer, and four rocky objects. The others include a medal, a glowing-eyed mystery Martian and a pincer-type. When Lost in Space meets Futurama, a neat retro-futuristic, something happens to the symbols.

Title: Mystery Mission to the Moon

Mystery Mission to the Moon has different features that make it a must-try game. One of the outstanding features a player should pay much attention to is the mystery stack symbol. These symbols appear on all reels. If three mystery stack symbols land in the base game, each will be nudged to cover its respective reel and then turn to gold.

However, paying for a winning combination will show the same pay symbols and pay along the 20 paylines regardless of their position on the grid. But if a player tests the game and lands matching symbols between the regular reels and golden mystery stack symbols, it will reflect on the win.

The wild symbols are also very crucial in this game. The wild moon symbols can substitute for all the symbols except the mystery stack symbol. If it lands on all the reels, it’s worth will equal the highest-paying symbol. Landing 3,4,5,6 wilds will earn 8.10.12 and 14 free spins, respectively.

The gold mystery stacks will reveal matching symbols until the end of the feature. This earns wins on all the 20 paylines regardless of their position on the grid. But when a mystery stack hits, it will award +1 free spin.

If a player wants to enjoy a bonus round, they have an option of the bonus buy feature. It allows the player to buy free spins. To trigger the free spins, the player should use 3,4,5, or 5 wild moon symbols which are equal to 102X,161X, 237X, or 332X the bet, respectively.

But the other option is 200x the bet, and it lands a random number of 3 wild moon symbols. Note that the RTP will appear on the game info screen, which varies from 96.3% to 96.65%, which is the highest mode.

Mystery Mission to the Moon is a well-organized game that gives players value for their money. The game’s setting is a mystery museum, but the developers changed some elements to provide it with new territory. The game has a bigger grid with more paylines which, according to the developers, increases the volatility.

What’s good about this slot is that a player gets the bonus round many times on the base round. Unlike the Mad Cars slot, this game is not very brutal but with the possibility of bumpy rides. But in between the bumps, good things await a player. For example, the bonus round earns maximum pay after landing three or more mystery stack symbols. The free spins are also encouraging as they reveal a matching pay symbol.

However, you should know that this is another version of the famous Book of style pay all lines mechanic. The maximum win of the Mystery Mission to the Moon is 10000x the bet which is double the win of some slots like Book of Dead.

The main downside of this slot is the lower winning potential than in Mystery Museum. But this doesn’t mean the 10,000x the bet won in mystery Martian full screen isn’t good. It offers a hit probability of 1 in 1,216,101.8 when the Ante Bet is active. But it goes to 1,778,410.1 when inactive. This means if a player is not much into making the biggest wins, this game is worth a try. It’s entertaining and with good visuals and graphics. The features are also good and pay well.