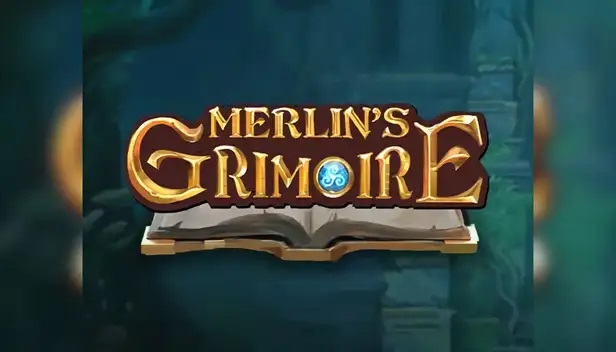 Merlin’s Grimoire, another Book-style slot machine from Play n GO, is expected to be released soon. This developer has already released a number of similar games, albeit they usually have an Ancient Egypt theme rather than a fresh one like this one. The story is clearly influenced by Merlin, the legendary character in all King Arthur stories, and the term Grimoire refers to a spellbook, so we can see the Book connection there.

We’ll see 5×3 reels, as in many other Book-style slots, but they’ll be occupied by a distinct system, with 243 ways to win that can expand to 7,776 ways. The potential is far greater than I’m used to seeing in this category, with the slot paying up to 30,000x the stake while maintaining a high level of volatility. It has several unique elements, such as the Splitting Symbol concept, but it also has standard features like mixed wild/scatters and free spins with expanding symbols.

Merlin’s Grimoire demands a minimum wager of $0.10 to begin, with a maximum wager of $100 each spin available to those who can afford it.

Merlin’s Grimoire stands out since it pays out significantly more than the other Book slots. Most slot machines pay out up to 5,000x, sometimes even 10,000x, but this one can pay out 30,000x the bet. It is apparent that the paths to the win-based engine were not wasted in this game.

However, there are drawbacks, such as the fact that individual combinations pay significantly less (up to 4x for the best symbols, compared to 500x from typical Book slots that have only 10 lines). It has a lot of volatility, but that’s to be expected.

You start with 5×3 reels and 243 chances to win, which means you can construct combinations. During paid spins, one to three of the middle three columns may be impacted to show symbols that split in half at random. This increases the number of active ways by adding extra symbols to those reels (up to 1,944 ways possible during paid spins).

The Grimoire, or spellbook, is the slot’s special emblem. Because it’s the wild, it can be used to help you make more winning combos. It’s also a scatter, and three to five of them in view will award 10 free spins.

One of the new features is that the Splitting Symbols can now appear at random on all 5 reels, giving you a total of 7,776 possibilities to win.

There’s also an expanding symbol, which is chosen at random at the start of the free spins. If enough symbols of that sort land on the reels, they grow and are organised left to right. Do you want to win a 30,000x jackpot? During free spins, get the top-paying symbol to expand on all 5 reels in a round where all symbols split. You’d get the highest jackpot if the 7,776 chances to win each paid 4x the bet.

This game looks to be inspired by Merlin, possibly the most well-known wizard, and is set in a dark woodland that hides a long-lost Celtic temple constructed of stone. We see him as one of the major symbols, and he appears on the reels alongside crystals, potions, scrolls, and six distinct sign symbols.

Merlin’s Grimoire slot tries to bring new vitality to the Book genre by including more ways to win. It also pays a lot more, and it could be a nice break from all the other very comparable possibilities in this category.