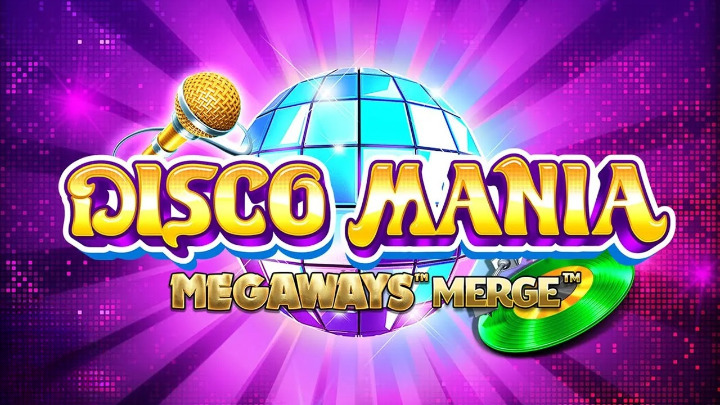 When the words “disco frenzy” are mentioned, players will either flee in panic or put on their dance shoes and flaunt their stuff. Okay, so there’s the option of apathy as a medium ground, but let’s go with it. Disco Mania Megaways Merge, a boogie-centric slot from software supplier Skywind Group, is available to players who like to cut a rug. Disco may be old hat, but Skywind has added a few new elements to Disco Mania Megaways Merge to give it a fresh, new spin.

Disco Mania Megaways Merge is visually restrained for a music genre known for its flamboyance. While the purple disco ball effect of the background is colourful, it didn’t demand that we surrender to the beat and lose ourselves in the moment. Thankfully, the game’s soundtrack, which is the true beating heart and soul of disco, is rather funky, and when mixed with the revolving light effect, it did cause some toe-tapping.

If standing out from the crowd was an element of disco fashion, Disco Mania does this by combining its two grids to create a massive number of winning ways. Players start with two standard 6-reel game grids, each with up to 117,649 possibilities to win. When similar symbols land in adjacent reels from the left side of the grid, the cascade feature is triggered, potentially leading to the merge moment. More information will be forthcoming. Until then, keep in mind that this medium volatile game features a 96.5 percent default RTP and bet options ranging from 20p to £/€200 each spin. Alternatively, you can use the Twice Chance button to increase the bet by 25% and double your chances of triggering the bonus round.

You might imagine that when grids converge, symbol values would suffer because there are so many different winning ways, but this isn’t the case. A six-of-a-kind win on the 9 to A low payouts is worth 0.5-1.5x the wager, whereas landing six premium albums, roller skates, microphones, or boom boxes pays 2-5x the stake. Wilds also appear on all reels and pay out at the same rate as the boombox. Wilds, on the other hand, are usually used to replace regular pay symbols.

Disco Mania’s calling card is the Merge function, which is accessed through the cascading winnings mechanic. The cascade mechanism removes winning symbols, allowing additional symbols to fall down and fill the vacant cells. If another win occurs, the cascade feature is activated once more until no more winning combinations exist.

When three cascade wins occur in a row, the two grids are combined into one. Each reel can contain up to 14 symbols and there are a total of 7,529,536 active ways in this grid. The grid splits into two for the next paid or free spin once the cascade sequence ends.

Bonus Spins: The disco ball scatter is another symbol to keep an eye out for. 12 free spins are granted when four disco balls appear at the end of a cascade sequence. If there are more than four disco balls in view, each additional one offers +5 free spins. With one exception, free spins follow the identical rules as the base game. The bonus round now features a progressive win multiplier that starts at x1 and increases by +1 after each winning cascade. There is no upper limit on the win multiplier, and it does not reset between free spins like the Merge feature does. Landing three scatter symbols throughout the bonus round delivers an additional +3 free spins plus 3 spins.

A game with so many chances to win is bound to be daunting, but Disco Mania Megaways Merge avoids the extremes that a similar game like Slot Vegas Megaquads may achieve (though to be honest, that one hasn’t exactly demonstrated its potential yet). The Merge function, on the other hand, has potential, and it will be interesting to watch how Skywind develops it.