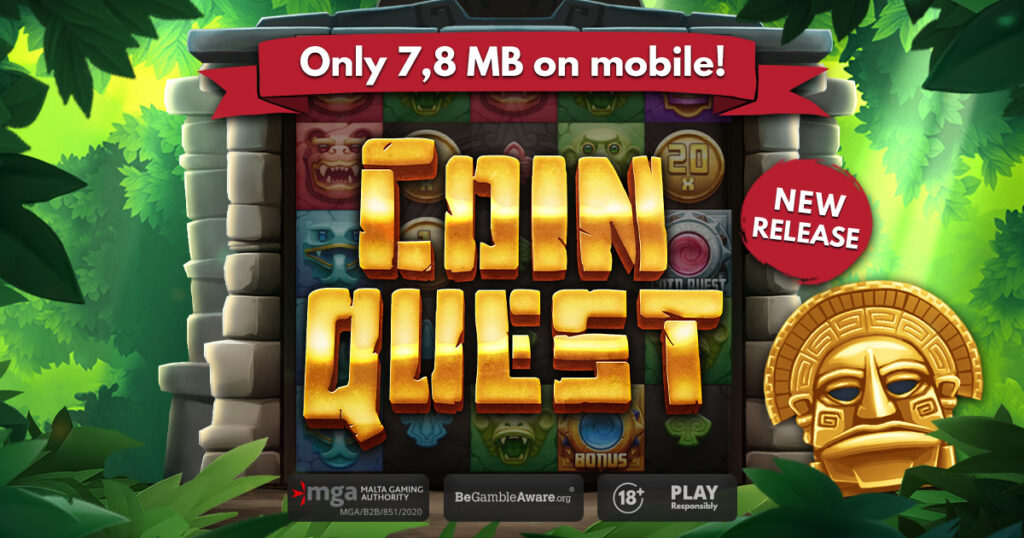 Are you up for a little currency hunting in the woods? In an online slot titled Coin Quest, software company Slotmill is sending interested gamers to the well-trodden area of Central America. Coin Quest is a cluster-paying grid slot with an Avalanche win system, as well as a collect system, three different bonus rounds, and many feature purchasing options. So, while the subject isn’t particularly original, Coin Quest offers plenty to keep you occupied, so put on some bug spray and join us if you’re up for it.

Coin Quest, which is played on a 5×5 game grid, is a highly volatile slot that offers qualified gamers a variety of options to play. When playing in normal mode, the RTP is set to either 96.12 percent or 94.36 percent, with stakes ranging from 20p to £/€40 each spin. Other modes are discussed in the features section below, where players in certain jurisdictions can pick between three bonus buys and the peculiar Burst Mode.

When at least five matching symbols land adjacent to each other in vertical or horizontal directions, the winnings begin to flow in. The Avalanche feature is triggered by winning clusters, and there are seven normal paying symbols to work with. These begin with three lower-value red, green, and blue tiles that pay 0.25-0.3x for five of a kind, rising to 6-10x for clusters of 12 or more symbols. The four higher-paying symbols are three animals and a skull, yielding 0.3-1x the wager for five of a type and up to 12.5-40x the bet for clusters of 12 or more.

The Collect Meter, which is available in both the regular and bonus games, is fed by avalanches. The Collect Meter advances by +1 for each symbol eliminated in an Avalanche. When you collect 25 symbols, the Sun God feature activates, bringing Coins and Wilds to the game screen. The metre resets at the end of each basic game spin.

Coin symbols can have values ranging from 1x to 500x, in addition to conventional symbols. When five or more coins land in a cluster, their values are put together and multiplied by the bet. The win is paid out, then the cluster explodes, resulting in an Avalanche; however, one of the empty places is filled with a new Coin symbol containing the Coin cluster’s total multiplier.

This feature is triggered when two Coin Quest Bonus symbols show on reels 1 and 5 at the same time. When you do, you’ll be granted 5 free spins, with the collect metre remaining active until the bonus round concludes.

Coin symbols remain on the grid during the Coin Quest, sliding to the bottom of the reels between spins. There, they have the ability to form larger clusters and values. When you land a +1 Spin symbol, you’ll get an extra free spin. When three Bonus symbols appear on reels 2, 3, or 4, the feature is upgraded to Super Free Spins, with an additional +4 free spins awarded.

Coin Quest gets off to a good start with a clean, nicely produced, though a little clinical, image of an Aztec temple setting. There’s some rainforest, some hefty stonework, and enough of Aztec-inspired iconography to set the tone. It didn’t immediately arouse passions, but it appears to be appealing enough to warrant more research.

Coin Quest is a classic example, Slotmill has nailed the basics in Coin Quest, given the game a beautiful aesthetic, and added some intriguing extras. It’s a well-made cluster-paying slot with a fascinating use of symbol groupings, multipliers, and coin features, with prizes up to 10,000x the bet.