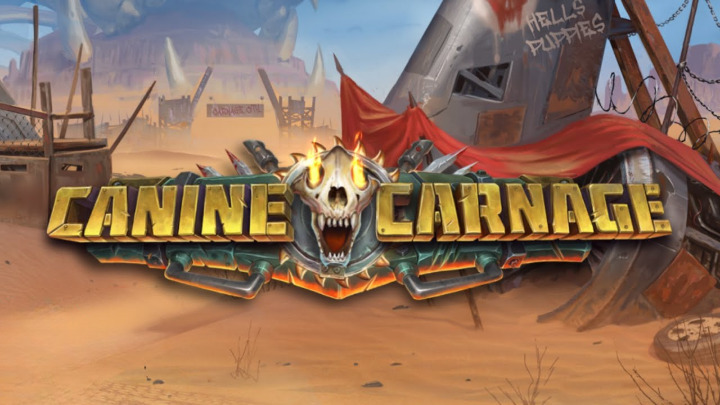 The Canine Carnage by Play’n GO is a slot game to enjoy playing after a long tiresome day. The game has doggies that are out and about moving around with powerful vehicles while listening to sweet techno tunes. The Canine Carnage shares a story concept with Nitropolis by ELK Studios. However, there are some differences between the two, which will be found below.

At the start of this slot, a monstrous car races through the desert, moving into the junkyard. The game’s graphics are on another level as the developer includes great visuals with both canines, cyborgs, and vehicles. There is also a dance track all over the place that attracts players to see the goodies awaiting them next.

The slot happens on a grid with five reels and three rows, and there are 243 ways to win. However, you need to note that the different ways to win increase after the symbols begin splitting. Canine Carnage is a medium volatile game accessible through any device, like a phone or laptop. The bet amount ranges from 10 p/c to 100 euros per spin. You should trigger the payouts by landing matching symbols from left to right to win.

The wilds (spitter wilds), which are five times the bet, can substitute for any paying symbol. Note that the splitter wilds are called so because they split certain symbols on their right but in the same row when they hit. The symbols that can be split include the characters, royals, wilds, and golden bones. However, the scatters, multipliers, and collectors can’t split. Additionally, this can result in an additional 1 to 3 wilds on the grid.

Canine Carnage has valuable features that help players earn more than their bet. The splitter wilds, multiplier, golden bones, and royals are some features that stand out in this game.

The good thing about this feature is that the symbols can land anywhere on the grid and earn instant cash prizes. The maximum value for the golden bones is five times the stake. However, there are instances when 3 to 6 golden bones can increase randomly on the reels. But when the golden bones land on the reel simultaneously, they are referred to as collector symbols and add value to a player’s total wins.

The bone spins feature operates differently since the regular pay symbols are eliminated from the reel if they’re active. To get bone spins, you need to land flamingos that can scatter. For example, six bone spins come from landing three flamingo petrol can scatters. However, when you land the golden bones, you’ll earn their values instantly, and this value will reflect on the cash pot on top of the reels.

Landing collector symbols mean the player will be awarded everything in the cash pot. What’s unique about this bone spin is that other features can be active as it runs. For example, when 1-3 features are active, 3-6 golden bones will be added to the grid. Multiplier symbols may also appear, but their value shows at the end of the round.

If you are looking for a game that will keep you entertained and busy, try the Canine Carnage slot. It has a blend of features borrowed from various slots like Money Train Games, the Nitropolis range, and Nolimit city. The game has excellent visuals and sounds after the developer made some changes to boost the experience. This is a fast flow game that has attractive features that are worth every time on the screen. However, it can be challenging for those not used to the world of canine dystopia.

The base game’s pace is commendable, including golden bones collects and splitter wilds. You can as well land free spins in the base game. But you must be keen on the bone spins, as it takes dedication to win.

The audio-visuals are a plus as they keep players glued to their screens without boredom. The RTP is also good and in different modes, and the bonuses earn between 50-150 times the bet. Additionally, the good number of ways to win and the multipliers are tempting for any player.

However, the maximum win of 30,000 times the bet is worrying as it doesn’t match the hype the game comes with. Overall, Play’n GO has done a good job with this slot as they developed something extraordinary. the visuals, graphics, and sounds are wonderful. The original production means the team is not out to play and is ready to raise the bar.