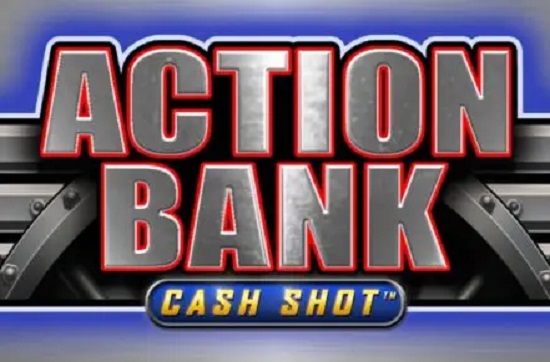 The most recent addition to a modest collection of slot machines supplied by businesses owned by Scientific Games is Action Bank: Cash Shot (rebranded to Light & Wonder now). Despite the game’s unimpressive appearance, I like the rewards that could be earned as well as the several original elements that were introduced.

With the aid of 1,024 ways to win, you receive 5×4 reels, which you utilise fully. There are some decent payouts there, and just a few scatters can help you win 5,000 times your wager, but the RTP of 90% seems way too low. The free spins with double symbols, scatters, and the Golden Vaults are the main features to watch out for.

The minimum amount needed for the wagers you can make in Action Bank: Cash Shot is $0.20 each spin. A bet of up to $50 is also an option if you decide to go higher.

The feature is quite straightforward, with scatters frequently occurring and paying up to 5,000 times the wager when they do. Even though I’m satisfied with the payouts given so far, the slot’s claimed RTP of 90% hasn’t persuaded me to try it. If a greater RTP is provided, it appears to be intriguing.

The slot’s primary feature will probably also be the one that pays out the highest. I’m referring to scatter symbols, which, if there are up to 15 of them visible, will pay anything from 5x to 5,000x the bet. These represent images of bank vaults.

If you can, a Golden Vault will be of great assistance. When it lands, it could award up to 15 Bank Vaults, which could result in significant gains.

The game can grant access to a free spins feature with three or more bonus symbols. The introduction of double symbols, which should make it simpler to form winning combinations, will be a key aspect of it.

The game’s most lucrative moments can be found by using vault symbols. Only the sixth reel, where they swing into view, features them. Free Spins begin when 4 of a kind land. When one of the vaults is selected by the player, it opens to provide up to 16 free spins. A further free spin, up to a maximum of 20, is added when any Zero is visible on the reels during the feature’s activation. To prolong the bonus round longer, free spins may be reactivated in the same manner. Free spins are governed by the same rules as the base game, with the exception that Double 7, Bar, and X symbols are included. Only two of the ordinary variety are represented by these symbols, which only appear on the first reel.

There isn’t much of a theme in Action Bank: Cash Shot. With some Tic Tac Toe sprinkled in, it’s mostly simply a classic. As a result, the very simple visuals incorporate symbols with Bank Vaults and Golden Vaults in addition to the X and O, Sevens, and Bar emblems.

Action Bank cash shot slot is an interesting slot with good initiative. It is awesome for game lovers and can give 5000 times the stake. It can also give up to 90 oercent RTP which is a bit disappointing for this slot.